My newest article. The Strange State of Gaming Journalism

For those interested, I have a new article up on TheSuperPlexBros.com that deals with the current look of gaming journalism, and its apparent infatuation with identity politics over the past few years.

Fell free to leave comments here, if you want. 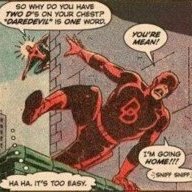 Firstly: you have a typo in the headline!

Overall I wish you had linked to your examples. It felt like a lot of strawmanning and hyperbole in parts, and I mean - I know it's an opinion piece, but I feel like the points you were making would've been better served with examples. The tweets you shared from Oliver Campbell and Brad Glasgow helped illustrate the point by sharing an explicit example of what you were talking about.

This is what I mean about strawmanning: "And, much like any other ideological zealot– religious, political, or otherwise– they see their version of the truth as absolute. Anyone who doesn’t agree with their worldview, 100%, is summarily “wrong” (some might say that all zealots see anyone who isn’t 100% with them as “evil”), and should be attacked, mercilessly."

You're not providing specific examples, it seems more of a rant about a certain nebulous group, but when you're speaking so extremely I think examples are quite important. Overall speaking in extremes (whether it's saying "gamers are stupid manbabies who harass women" or "when people don’t agree with them, they’re spawns of satan and the scum of the earth") tends to alienate any kind of moderate views, or at least I think it does a disservice to your point because I think it comes across as more ranting than actually trying to make an argument. You don't define who "they" is, it seems more like a general rant against progressives than anything - which is fine, I guess, but not really as convincing without saying explicitly "here (link) is an example of identity politics where someone disagreed and was called the spawn of satan".

To share my own opinion: I think you made some really good points. I agree that a lot of reviewers are afraid to be honest because they don't want to piss off publishers. I think it is a problem if game journalists are disdainful towards the medium or their audience. I never really considered reviewers playing on easy mode but I agree that doing so means they're just trying to blow through it. Personally although I consider myself a progressive, I don't like reading reviews that are super focused on identity politics (it bores me and it doesn't usually influence my decision to purchase a game or not). But - reviews are always going to be somewhat subjective so if a reviewer wants to say "this was super racist/sexist/gross", then whatever. I don't think reviewers focusing on aspects of the game that I don't care about is on par with reviewers deceitfully promoting their friend's games or censoring themselves to avoid blowback from publishers. (For example, saying "this game is not great technically but it promotes great LGBT characters so I think you should buy it" is fine to me - not deceitful. Same with "this game is not great techinically but it's a lot of fun so I think you should buy it". Both are being objective about the technical quality and transparent about the subjective aspects. That way you can decide if LGBT representation, or fun, or any subjective quality is important to you and decide for yourself.)

I think we just fundamentally disagree on this: "They attempt to insert other things into games journalism that, in all honesty, has little to no place there. Things like identity politics, and other socio political ideals and agendas are frequently seen making their way into game reporting and reviews. Things that have little to do with gaming are often reported on in some way or another… for reasons, I suppose"

I want to read about someone's subjective review, beyond just "this game did not glitch, it performed adequately". Was it fun? Did you like it? Did the story make sense to you? To me all of that subjective stuff is important, and I see "identity politics" as part of that. I personally enjoy looking at how pop culture fits into a larger piece of the puzzle. I love gaming and video games and I love seeing how people and games interact. So to me, that kind of stuff IS relevant and IS interesting (or, can be - I don't necessarily care about "this game is sexist" but maybe a broader discussion of how certain games fit into our current sociocultural landscape, hell yeah). Why should you (or anyone) get to arbitrate what is relevant or not? I agree with your ending that people should support sites that provide information they find relevant/important/etc, but I disagree with your notion that what you personally find unnecessary inherently "has no place there". Ultimately to me it's just a matter of "read what you like". So I think we agree on that point, haha. I just don't agree that looking at a broader context (social, political, psychological, whatever) has no place in gaming. And if the readers are into it and the writers are into it, then power to them. I haven't posted recently, hopefully will be back soon!

GenXoxo said:
I think we just fundamentally disagree on this: "They attempt to insert other things into games journalism that, in all honesty, has little to no place there. Things like identity politics, and other socio political ideals and agendas are frequently seen making their way into game reporting and reviews. Things that have little to do with gaming are often reported on in some way or another… for reasons, I suppose"
Click to expand...

More than reading a review that is subjective to the reviewer him or herself, we have to remember that gaming doesn't happen in a bubble. Game design, game playing, game enjoyment, game discussion, game journalism - none of it happens outside of society as a whole. The entire path a game takes is touched by the experiences of everyone who lays hands on a game along the way, including players and reviewers.
Toggle signature

M
A whale taking over a room - how long does it last usually?

I love being supportive of other models but some things are just too much!

What are the realistic chances of being discovered by my family?