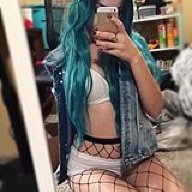 I've been camming for about a year now, but I just recently started using mfc and have been having an issue no other site has caused me before; so I was wondering if anybody knew how to help solve it, or if it is even solve-able.
I keep getting messages on my Skype account, I typically just decline or ignore them because I know they're all scammers trying to take advantage of the fact they think I'm entirely new to the world of camming; but I accidentally fucked up I think on my first day and accepted a message from a guy asking if he could send me tip menu ideas and give me some general information about the site.
I took his sample tip menu as a consideration, and then asked him how he found my Skype. His response was that he and I quote "have my way of finding things", which I know you could probably use some type of image search/search for users similar to my mfc account one, but the way he said it just made me kinda uncomfortable. I just stopped replying after that, and for the next few days he messaged me a few times asking me where I went and if I was okay. At that point I asked him for his mfc user so that I could 'add him and pm him there' (actual intention was to ban him), and he said "oh and let you ban me? no thanks." and when I didn't reply just started telling me I was a "stupid slut for not accepting help and need to get a life, fucking loser", I'm not really upset about the shit he said, I've learned to tune out the trolls by now, but it's just a little aggravating that he can talk to me like that and I can't ban him because I don't know his user.
I was just trying to see if theres 1. a way to find his mfc user through his skype account and ban him, and 2. a way to make who can contact me on skype more private, or make it harder for people to find.